Kawagoe ist located near Tokyo, last time I visited there in 2014 and took lots of photos of the old town center. For more photos you can see the visit the gallery.

Kawagoe is located about an hour by train from Tokyo. Your best choice is departing from Shinjuku Station with the Seibu-Shinjuku Line (Express) and riding till Hon-Kawagoe. Another option is to take line Tobu-Tojo departing from Ikebukuro to the station of Kawagoe-shi. 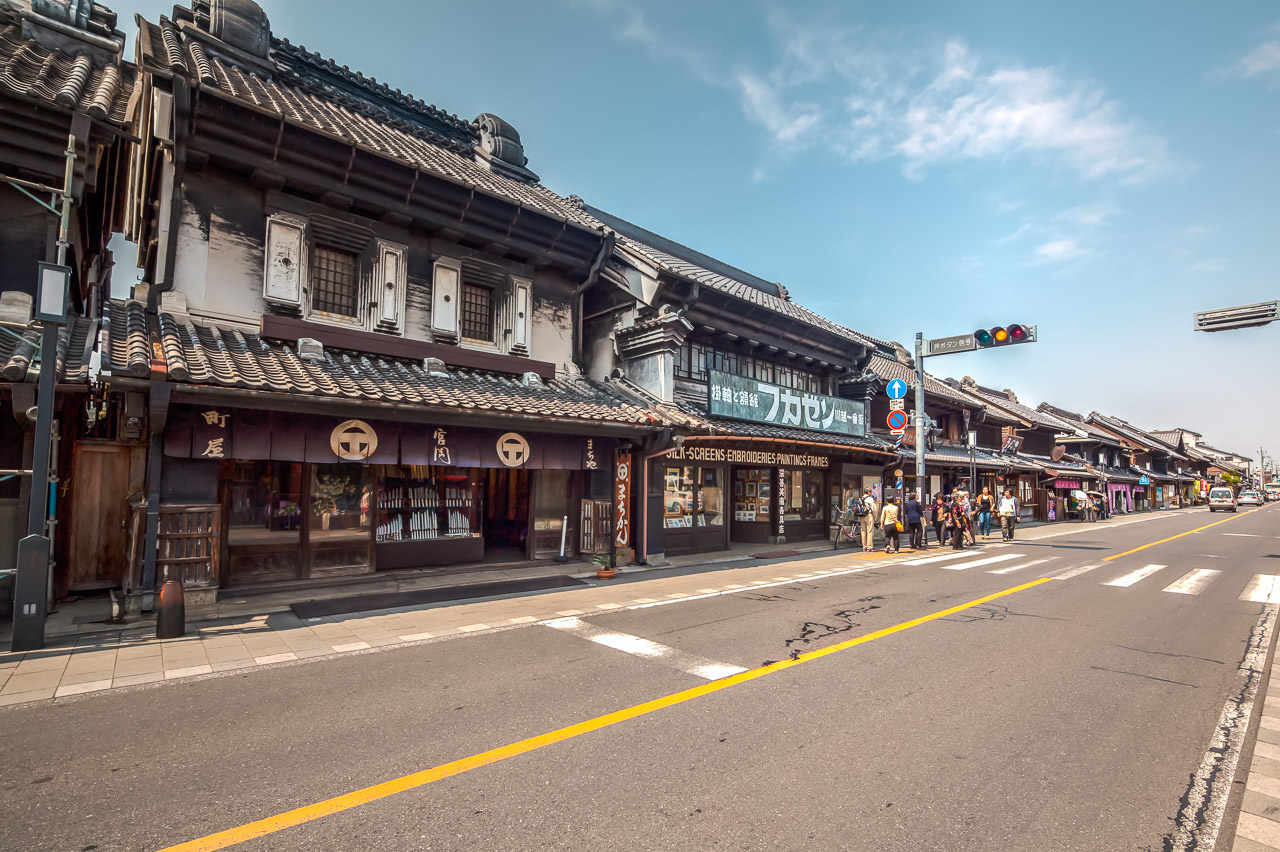 Kawagoe is also called “Little Edo”, for some of its old buildings have survived both the earthquake of 1923 and the WWII air raids. In Kurazukuri Street there are found old fire-proof warehouses (Kura); today they are home to souvenir shops, restaurants and cafés. The oldest building preserved is the house of the Osawa family, built in 1792. Admission 200 ¥. 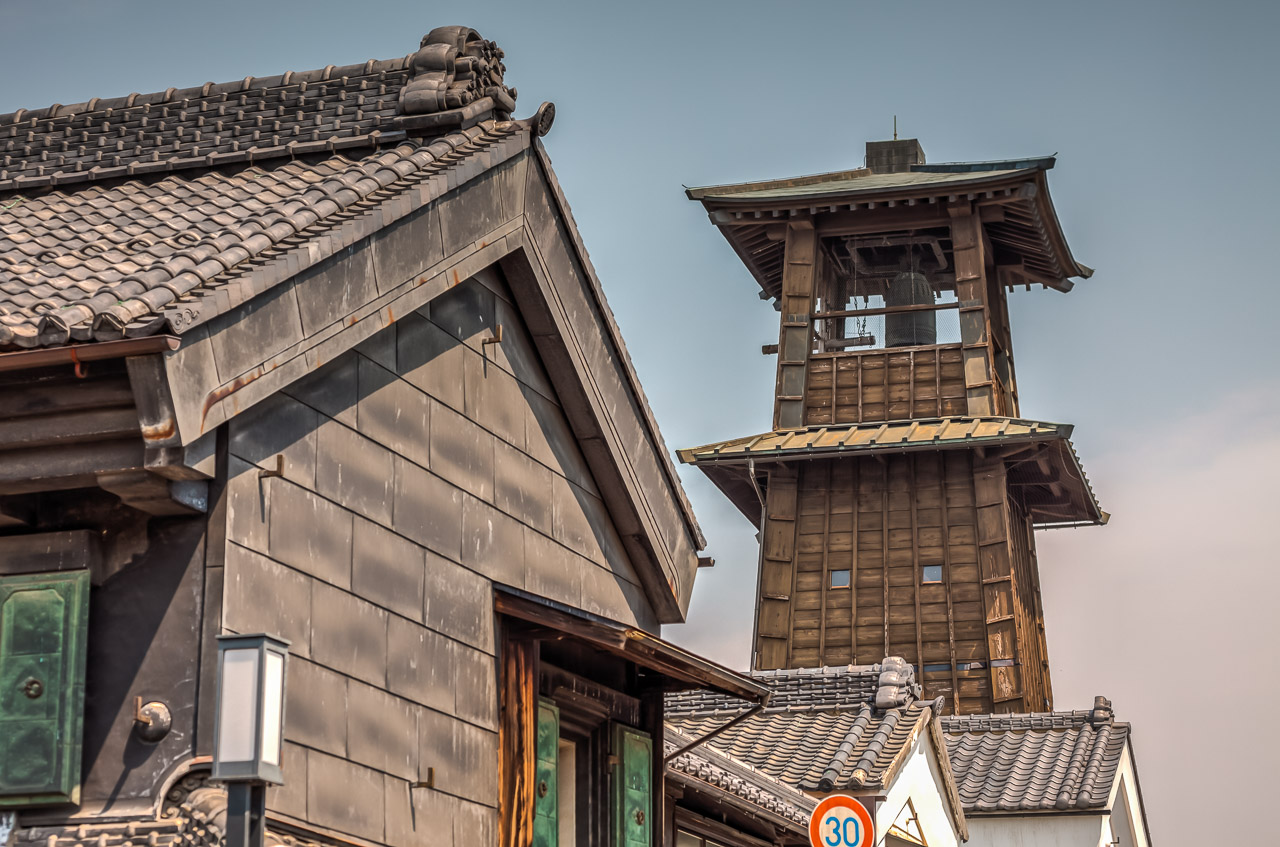 Another attraction is the wooden Bell-Tower (Tokinokane), raised 400 years ago. The current tower was rebuilt in 1893, following a fire. Till today, it tells the time four times per day (at 6am, 12am, 3pm and 6pm). 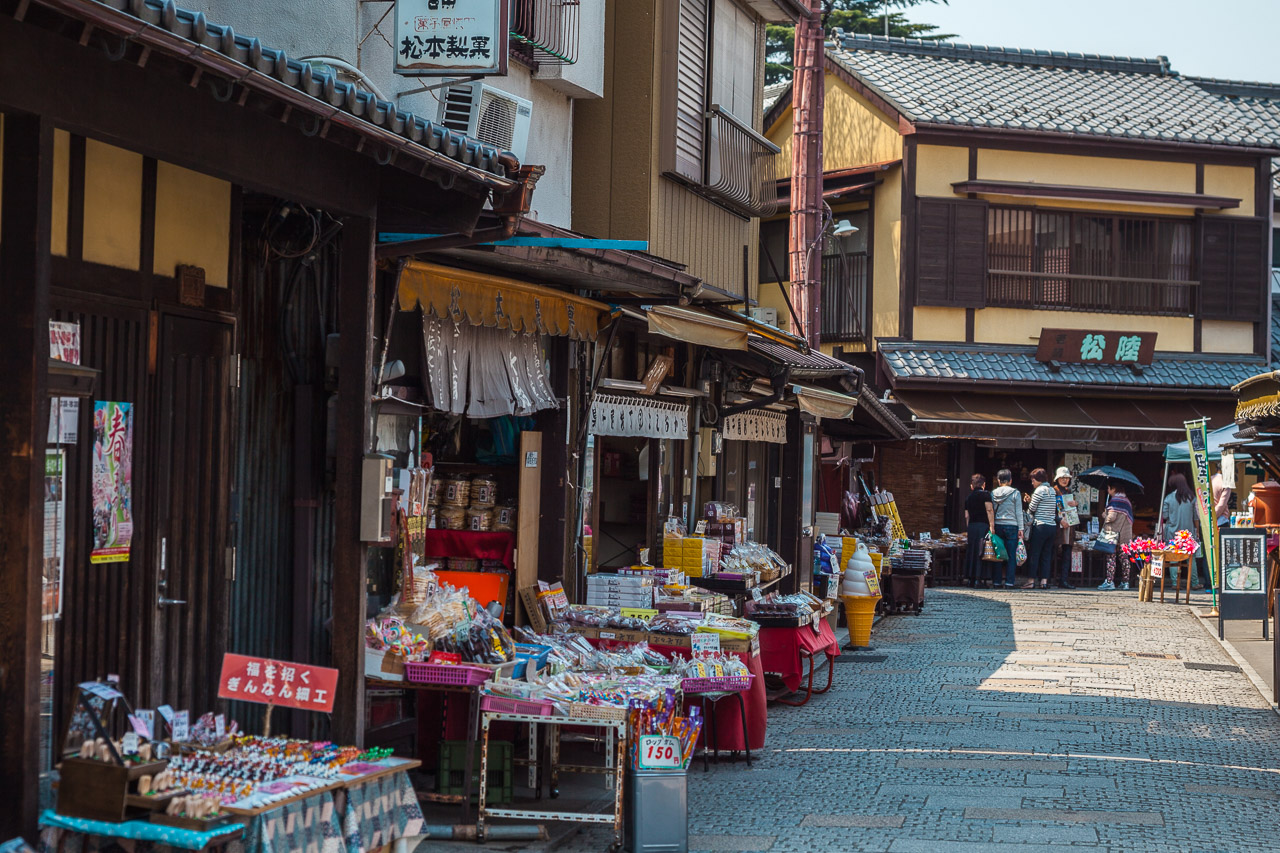 The narrow Candy Alley, lined with sweet-shops, is bound to provoke nostalgic childhood memories among many Japanese people. The origin of this alley dates back to the early Meiji Era (1868–1912). 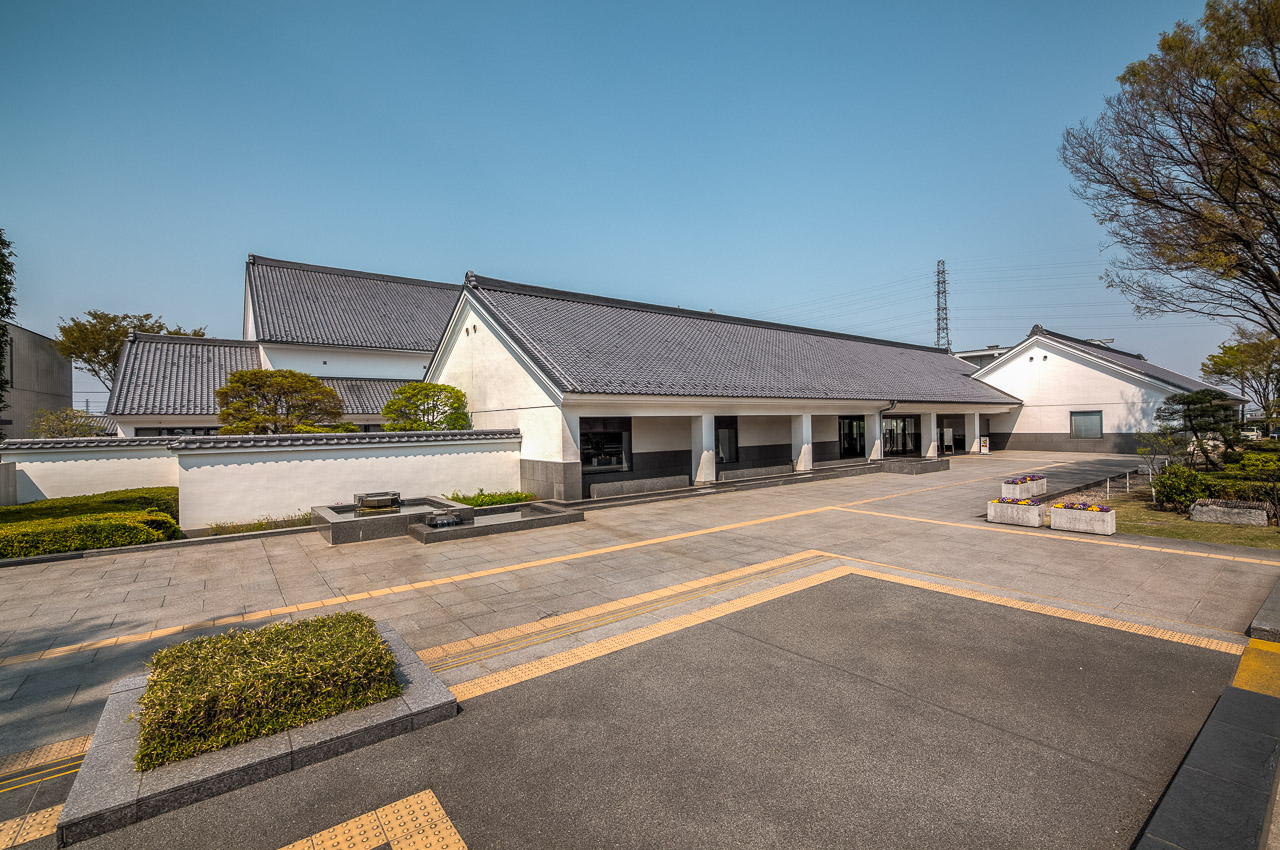 The Kawagoe City Museum is quite new and gives a good introduction into the history of the town. Special attractions are the model replicas of the old town and the backgrounds and construction of the fire-proof warehouses (Kura). Open daily except Monday 9am–5pm (closed at the 4th Friday of each month, the day following a holiday, and 28 Dec–4 Jan), admission 200 ¥. 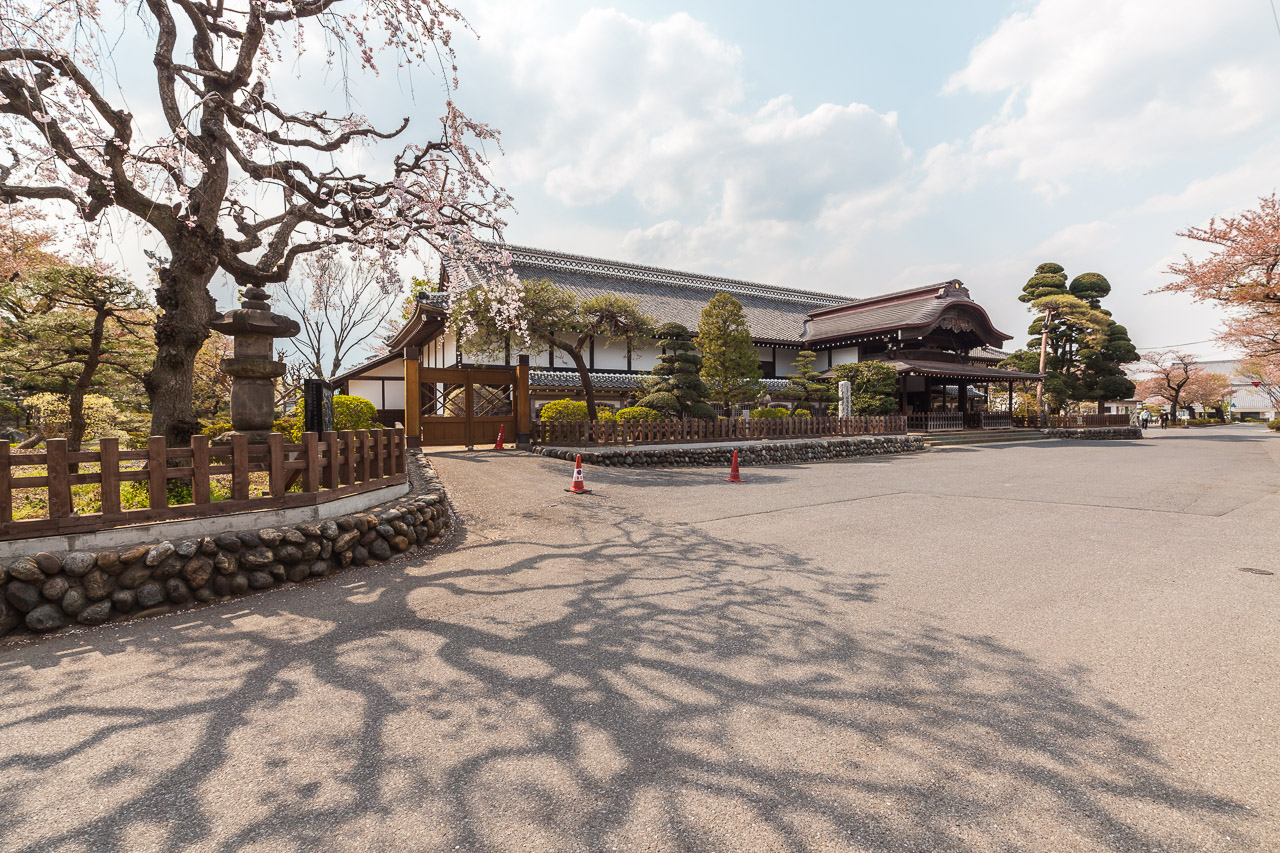 Honmaru Goten is the only preserved building of Kawagoe Castle, first built in 1497. Kawagoe Castle served to Tokugawa Ieyasu as his most important defensive fortification towards the North. Honmaru Goten was the innermost building of the palace and the feudal lord’s residence. The current building is a reconstruction, dating from 1848. Opening hours see City Museum, admission 100 ¥. 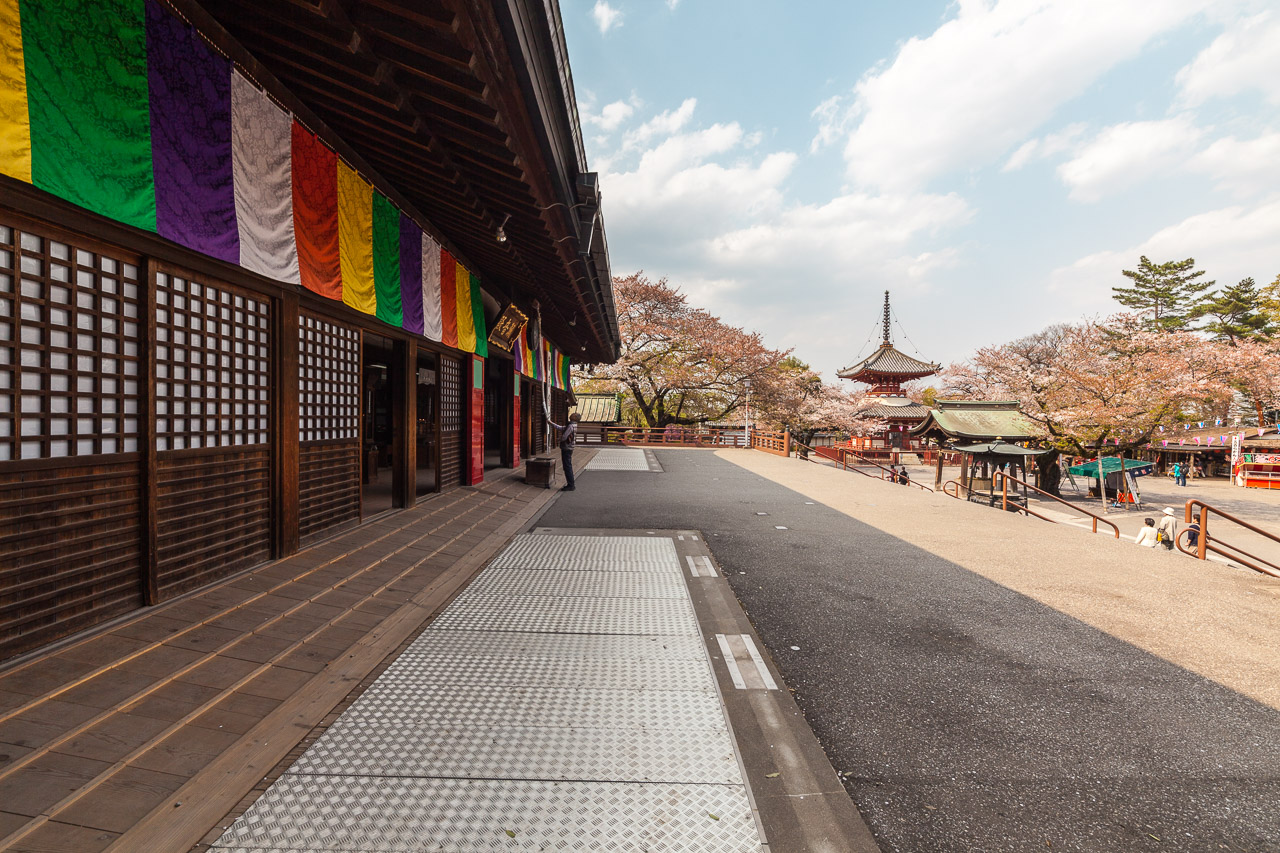 The Kitain Temple belongs to the buddhist Tendai sect and was founded in 830. In 1300, Lord Gofushimi nominated it as future main temple of the Tendai in Japan; it remains main temple of the Kanto area. Some buildings of the Kitain temple represent the oldest preserved remains of the Edo castle in old Tokyo (Edo), for Shogun Iemitsu ordered to bring some of the buildings to Kawagoe, in order to rebuild the Kitain temple there. One of the most beautiful parts is said to be the place where Shogun Iemitsu was born. Another attraction are 540 figures made of stone, among which no two faces are alike and each of them is supposed to express a different human emotion. Each year at 3 Jan, the so-called Daruma Festival is celebrated on the temple grounds. Open daily 8:50am–4pm, admission 400 ¥. www.kawagoe.com/kitain